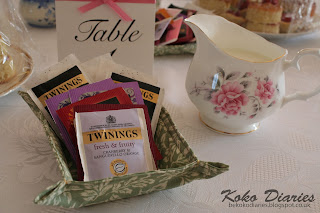 As I write this the sky is a hazy grey and people are walking around clutching their umbrellas. Dull weather but not a dull day. My view from the window is of the River Esk in Whitby where I'm spending a restful week after the fuss and exhaustion of a wedding party. 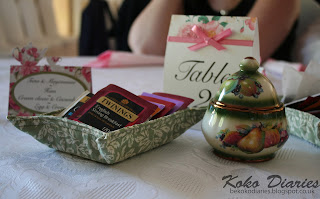 I want to show you what I made using the tutorial for the little dishes mentioned in my last post. As I explained in that post my brother and his wife have had a second wedding reception in Britain as most of his family and friends couldn't attend the actual wedding which was held in Italy.

My brothers Italian wife wanted afternoon tea which is quite a novel dining experience for non-Britons, I've learned. 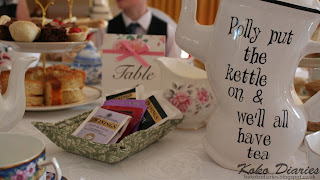 We had a selection of tea on each table for people to help themselves to so I made dishes to display them in. They needed to be a different size and shape than the square dishes I made to accommodate enough tea bags for all 8 guests at each table but the principle is the same.

Originally, my mum who was the party organiser, gave me some plastic tubs and asked me to cover them in fabric to be used as tea trays. But I thought sewing some trays would be much nicer so I decided used the tubs as a rough size guide instead. 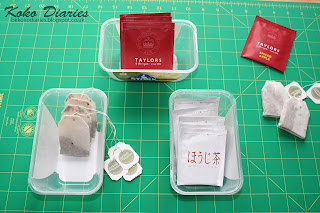 I measured the tubs and compared their size to different brands of tea, I've never noticed how varied in size they are before. The sides of the tub are too high and the bottom needs to be a bit wider. So I quickly calculated/guessed at an alternative size and got cutting. 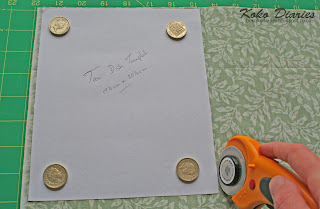 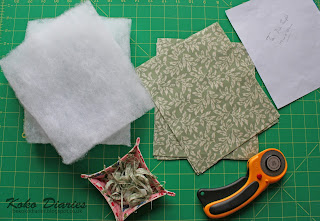 If you would like to make tea trays like mine the dimensions I used are 17.5 cm x 20.5 cm, the inner rectangle that forms the base is about 4cm in from the edges. I'm not going to write a tutorial here as these are made in exactly the same way as the original which I found on a Spoonful of Sugar.

The fabric I used was given to me by my mum and is quite stiff but not heavy and I have no idea what it is. It's stiffness worked well with these trays though. I decided to use a polyester wadding this time instead of the fleece interfacing I used last time which may have been a mistake as the trays were a bit more floppy than I would have liked. To counter the floppiness I experimented with quilting them but I had a lot of trouble with the marker I was using. I used an air erasable pen to mark out circles to quilt but they disappeared too quickly so I went over the circles a few times with the pen which then took a long time to disappear and reappeared with real vigour upon being pressed with my iron. Argh.. This is the pen I use to make pattern markings when I sew bags and is clearly the wrong tool for quilting. I've never made a quilt (as you could guess) so all of this is new to me. If you are a quilter, what marking tools do you use?

In the end I found sewing a second row of topstitch about 5mm away from the first gave enough structure to the trays. All in all I was happy with them and they served their purpose very well.

They looked very vintage and sweet sitting on the prepared tables in amongst the china, sandwiches and cake. Most importantly, my sister-in-law was very happy with the whole event and loved the afternoon tea. Mission accomplished.

I'd love to hear your comments

Welcome to my blog!
Koko diaries is the place I share all of my adventures in art and design. I love crochet, painting, sewing, embroidery, jewellery making, cake decorating, weaving, I love colour and I love texture. I hope you join me on my adventure.